A “Rasta-ration” of a Marley Favorite 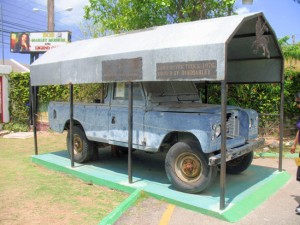 announced a special project to restore Bob Marley’s 1977 Land Rover. The Land Rover has been showcased in Marley’s old home in Kingston for 25 years before being brought to ATL Automotives’ shop in Montego Bay.

ATL Automotive released a time lapsed video of the progress of the project at the beginning of the month. Over the years Marley’s Land Rover began to deteriorate and this two month long project plans to rewind the wear and tear brought on by the car being displayed for quarter century, according to the Jamaican Star.

“There are few people in the world who Bob Marley hasn’t inspired through his music so it is only right that we ensure that his legacy continues for years to come,” said Sandals and ATL Automotive CEO Adam Stewart.

The vehicle was taken apart one piece at a time and is being put back together with new parts to bring it back into its original working condition. The vehicle will be restored with a new engine that was found in military vehicle in Ethiopia, according to a Land Rover news blog. The finished product will be brought back to Kingston to be put back onto display.