Last week Superkids was at Pell River Primary facilitating lessons in literacy, computers, and environmental education. Along with the outstanding lessons in the classroom, and breadfruit trees being planted around the school, David and Mikel Anne Arnce were bringing vivid color and beauty to an outside wall, they were painting a mural.

Since last February, David has been planning and preparing for the mural. Conceptualizing a bold work that included the sunset, the ocean, flowers and butterflies, he imagined an energetic interpretation of the Jamaican landscape all around. He cut out dozens of intricate stencils, many with several layers. He shipped cans of spray paint and even a ladder in the months before the project. Upon arrival, he set up his gear and got to work. He was soon joined by a couple of Jamaican teens eager to apprentice, they showed up and assisted David each day through the week. David’s wife, Mikel Anne, set up a camera that took a photo every 20 seconds throughout the week, and created a movie to journal the mural experience.

The kids at Pell River were intrigued by the project, at first shy, they soon became more brave and clearly wanted to try out the technique themselves. Several children got the opportunity on the last day of the project when David set many of the kids, every teacher, and the principal, up to paint their own butterflies. 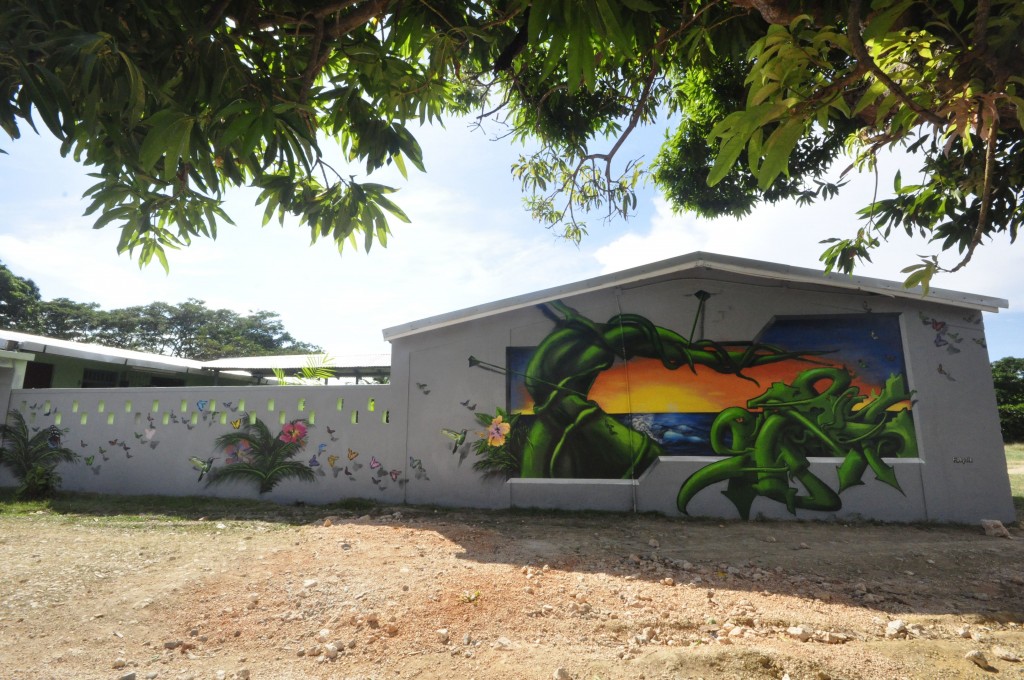 On the last day the mural was complete, It is an explosion of color that will last for many years, and provide the children at Pell River Primary a beautiful piece of art to get lost in, be inspired by, take pride in, and to remind them of the week they spent with the 2012 Superkids’ volunteers.

Thanks David and Mikel Anne for your dedication and talent!