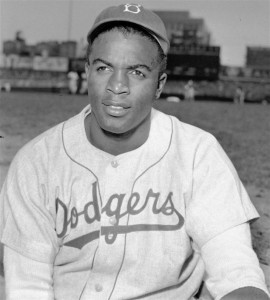 Today marks the 5th annual Jackie Robinson Day! For those who are not familiar with this legend, Jackie Robinson is the first African American to play baseball in the Major Leagues. In 1947, Robinson started for the Los Angeles Dodgers at first base, ending the racial segregation. Before this event, African American baseball players had been forced to play in their own league. Jackie Robinson is a renowned athlete, winning the Rookie of the Year Award, Major League Most Valuable Player Award, and was inducted into the Baseball Hall of Fame 1962. Robinson was a trailblazer in the Civil Rights Movement. His talent and determination led to equal rights in Major League Baseball. We are thankful for his courage!