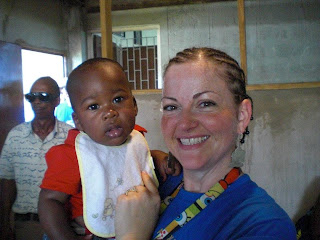 We absolutely love our iCare volunteers and enjoy sharing their stories with you! Here is a little insight into the life of Amy Sabella Malone; a 2011 iCare volunteer!
Name: AmySabella Malone
Where do you call home? Bainbridge Island, Washington…just outside Seattle

Occupation: I am a Washington State Licensed Dispensing Optician (LDO)

What is your day job? I am currently employed part-time at Bainbridge Vision Source but looking for full-time work in Seattle

Where did you go to school? I attended High school in Pico Rivera, CA and received my Associate Degree in Opticianry at Seattle Central Community College

Tell us about a joyful and challenging experience: 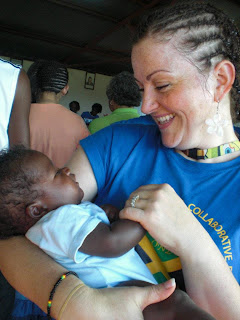 There were so many joyful moments! Getting to hold the babies is awesome. Watching the reactions as people who have never worn glasses can suddenly see across the room! Knowing that I have a skill that contributes to the world and that I am able to use it for such.
I did have one patient that sticks out in my mind. It was during week two…maybe day 3? As the day goes by and it gets busy it is easy to disconnect and not really see each person whom you serve. I was helping an elderly gentleman. I am not sure if you know my role in the clinic….I am an optician. We are the ‘end of the line’ where, after the patient has gone through the entire process (check-in, acuities, triage, refraction by the doctor and pathology, if needed) they come to us for glasses.
This gentleman had a run-of –the-mill RX, nothing too hard to match. But, as I reviewed all of the notes on his form, I saw that he had end-stage glaucoma in one eye…no vision. The Ophthalmologist on the team had given him some drops and a prescription for glaucoma meds. He asked me if the drops would bring back the vision in his eye. Sadly, I had to explain that he would never recover the vision in that eye. The best the drops could do was to halt the progress and, perhaps, maintain the vision in his good eye. I explained that if it had been diagnosed earlier and managed with meds he may have had a different outcome. He was visibly shaken by this news…but was thankful for my help and explanation. I told him that my mother has glaucoma as well and that I understood how upsetting it was to learn that there was no cure.
He explained to me that he had lost his job as a cook because he had lost his vision. He was so thankful, however, that we were there and that he was able to get glasses that would improve the vision in his good eye. He wanted me to have his phone number and asked if I would keep in touch. I would not normally agree but I just could not say no. He took out his wallet and showed me a piece of paper with his name and phone number on it so that I could copy it down. As I was doing so, I noticed that his name was incorrect on his intake form…and, therefore, on the prescription written by the doctor. I took the RX to the doctor to have her correct the mistake. She informed me that he would not have been able to have the prescription filled if I had not caught the discrepancy.
So, because I stopped and listened to Mr. Henry he can now get his RX filled. I don’t pat myself on the back for this at all…it just reminds me that every person has a story and deserves for it to be heard. He will stay with me as a reminder of this fact. I really believe that doing these trips makes me a better person because of what I get from the patients…not what I give.
Previous post An eye opening experience Next post Day Two Update from JA;