A Year’s Worth of Hard Work Finally Sets Sail!

October 6, 2011greatshapeincGreat Shape Inc, GreatShape Jamaica, Hotstart, humanitarian, Jamaica, reggae, Sandals, Spokane, SuperKids project, volunteer
Tuesday, October, 4th became a day of rapid response for those in the office.  At 4:30pm we were notified that in order to get the computers and supplies on the boat in time we needed to put our capes on and rev our engines or at least what was left near the end of the day!

Hitting the pavement hard, we emptied cars, began taking inventory on supplies and boxing up the computer lab in the living room and the storage closet in the garage; not excluding boxes of computer mice, keyboards, monitors and copious amounts of CPU’s.
Once all the donations were accounted for, our troop: Brad Adams, Craig Baumann, Lucinda Kay, Mike Varner, Valerie Bacon and Kegan Ovnicek hit the road in 3 full trucks with one mission in mind: get to Hotstart in the Spokane Valley-PACK.PACK.PACK!
Five hours later at 11pm the team wrapped it up with 4 packed pallets, just under 3,000 lbs of supplies and one big exhausted smile! 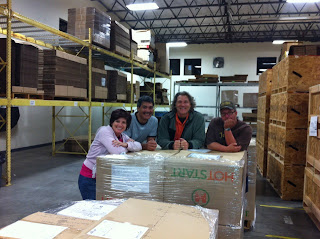 The day came to a close with an extremely content team, a year’s worth of hard work and more than enough generous donations from Whitworth University, Inland Retech, and Brad Adams!
Also, big thank you to Hotstart Distributors for the space and the packaging supplies as well as Let It Shine Media for providing (wo)man power!
Upon the arrival of our volunteer team, November 4th-21st, Brad Adams and team will be building computer labs in rural Jamaican schools! You can still volunteer to teach Jamaican kids how to use these computers, check our program info.

Thanks again to all those who have contributed to this year’s computer piece of Great Shape! Inc. SuperKids project!