Who doesn’t love a good Jamaican beat? Here at Great Shape! Inc. we enjoy having a good time listening to these unique tunes. So much so, that we felt like doing a whole blog dedicated to the backbone of these beats: the Jamaican drums! These amazing drums have a fascinating history, and incredible diversity. 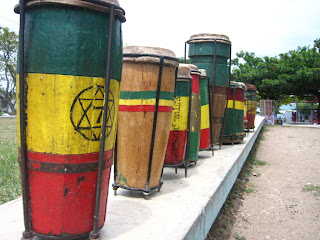 The drums have predominately African roots and were initially used by slaves way back when. However, the use of the drums was banned because they irked their white owners who didn’t understand the drums, and thought them to be ‘heathen.’ But banning the drums didn’t stop the Jamaican people, who continued to use them for worship, celebrations, and recreation. Drums were even used as a way to send messages to one another, in a way that their white owners couldn’t understand. Some of these signals were even known to start riots among the slaves. The drums would be dismantled after use to avoid punishment for having contraband material.

The number of drums is incredible! All the traditional drums are still around today, even being paired with more contemporary, American style drums sets, to give it a fresh, new sound. But, the folk style and traditions of the Jamaican drums are still predominant in Jamaica today. Let’s take a look at just a few of these drums.

Keeping the beat steady is the Fundeh. This drum is a medium sized drum that is typically used to help keep the beat for the music. This beat is repeated to help set the pace of the song and to keep the songs steady. Some people refer to it as the ‘backbone.’ This one is played with the hands (I wonder if it helps them feel the beat better….). 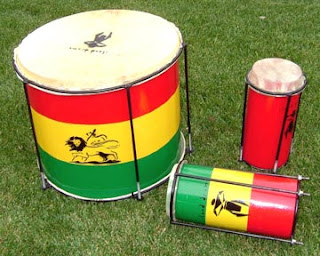 The drum that is most noted for the reggae sound is called the Keteh, but is also known as ‘the repeater.’ It has a higher pitched sound which is the tone that most people find indicative of reggae music. The drum gets it’s higher pitch from it’s small size, as this drum is the smallest of the traditional drums. This drum is played with the hands and is used to play the most complex rhythms in reggae music, which are often improvised.

The final drum, is the one with the lowest tone, the bass drum. It’s the largest of the drums as well. It’s played with a heavily padded stick instead of the hands, like the other drums. This drum can be up to four feel tall! You don’t have to be too tall to play this drum, because it’s held in the lap and played as you sit.

These aren’t all the drums though. There’s way more out there, these are just the basic three, which together are called ‘The Harp.’ Many of them have different variations, giving them varied sounds throughout the spectrum of drums. Some drums are even specific to certain groups in Jamaica, though most follow the pattern of these basic three.