Tami Ressa is an executive assistant for Let It Shine Media, she focuses much of her time (paid & volunteer) on client, Great Shape! Inc. “We love you, Tami! Thanks for all you do!” (Lucinda Kay, Communications Director for Great Shape! Inc.)

In first person, by Tami Ressa, Volunteer (from Spokane, WA):

Great Shape! Inc. SuperKids! How can I make a difference in one or two weeks, I asked myself? So many kids, so many needs. Specifically the need for one on one attention! 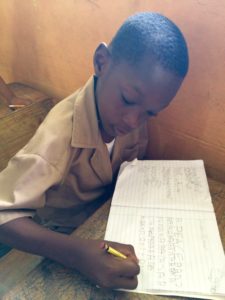 Day one in the classrooms was loud, chaotic, a little overwhelming and heartwarming all at the same time.

AKEEM. I immediately recognized his lack of attention, gazing out the window, watching what was going on outside the classroom, not paying attention to classroom activities… non-verbal, minimal writing skills, negative interaction with his classmates and lack of emotion.

Week One…
Ariel, from Oregon, taught Grade 3 that first week of SuperKids 2015. She recognized the need, and sat down with Akeem to better understand his needs. In addition to developmental delays, according to his teacher, he had experienced more trials than any child should endure.

His lack of attention and development needs, meant he was often left on his own; often ignored by many of his own classmates

In the classroom we would take turns sitting next to him at his desk. As Akeem began to receive one on one directed attention, he began writing letters. He’d specifically write the letter “A” beautifully, over and over. We praised him for his focused work. As this positive interaction continued, we began to see a sparkle in his eye.

Week Two…
Celeste, a teacher from Florida, joined the team seven days later. She identified that rather than writing words, Akeem would draw images to express himself. Whoa! So AMAZING to observe. Akeem showed such excitement. High fives. Wanting to show his classmates one on one…. and even by the end of week two… to the entire class!!
In addition, Akeem began participating in classroom activities and loved teacher Celeste’s praising – “Kiss Your Brain.” 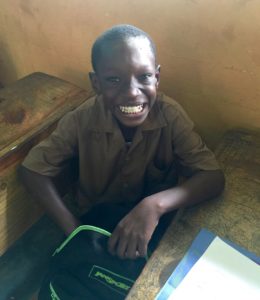 It really wasn’t until after I got home and took time to process the importance of our work in Jamaica with SuperKids, that I thought: Can I/we make a difference in such a short amount of time? The answer is Yes! For me, Akeem is my confirmation. Within two weeks I watched a child go from spaced out, submissive and reaching out for attention in a negative way, to smiling, productive and excited to share and interact with his classmates and volunteers!

Akeem is one of so many. We are the solution.

Caribbean Infused, Made with Love