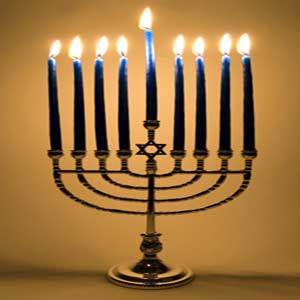 What’s Celebrated?
Hanukkah (also known as Chanukah; “Feast of Dedication,” and “Festival of Lights”) is an eight day observance which recalls the “Miracle of the Oil” in the Jerusalem temple during a war fought by the Maccabees in the cause of religious freedom. At the time, Temple candles only had enough oil to burn for a single day, yet they burned for eight days straight. Jews now light candles on a nine branched menorah (known in Hebrew as the hanukiah). On each of the holiday’s eight nights, another candle is lit after sundown- two on the first day, three on the second day, to nine on the eighth day. Jews typically recite blessings during this ritual and display the menorah prominently in the window, as a reminder of the miracle that inspired the holiday.

Any Special Traditions?
Traditionally, Hanukkah foods are fried in oil. Potato pancakes, known as latkes, and jam-filled donuts (sufganiyot) are particularly popular. Other Hanukkah customs include playing with four sided spinning tops called dreidels and exchanging gifts.
Try making your own latkes with this recipe: Link

Celebrate!
Listen to these awesome Hanukkah videos to get you in the holiday spirit! Link
Fast Fact: Judaism is the only religion in the world that lost its holy land and was able to regain it.
Celebrities who are/were Jewish: Sammy Davis Jr. (American singer), Scarlett Johansson (American actress), and Joan Rivers (American comedian)

Cool Updates From Our Projects and Information on Chikungunya Virus